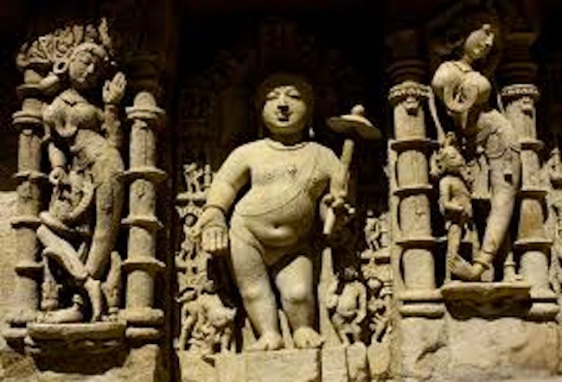 The first human form that Vishnu takes in his cycle of avatars is a deceptively simple and, at first glance, rather disappointing one. He comes as a little dwarf! Many fanciful interpretations of the avatar cycle being an embryonic theory of evolution have been bandied about. In this view, the Vamana or dwarf is evolutionarily correct, the first humans were indeed dwarfs as compared to our present stature.

The core story as narrated in various Puranas is simple. It is a highly expanded version of a single sentence in the Rig-Veda that,”Vishnu strode over this universe: in three places he planted his step”. By the time the Puranas got hold of that, it had become a great narrative. This avatar takes place in the Treta-yuga or second age of the Universe. The king of the Daityas or Asuras, one Mahabali (literally, greatly strong) had become powerful with the force of his austerities and he was showing up the gods in a very poor light indeed. They even had to vacate heaven for him, as they could not stand up against his might or his force of personality. It was very humiliating, but in terms of virtuousness they had to admit the Daitya had a better right to rule over heaven than themselves, who had habits and behaviors that were slippery and more than a bit reprehensible.

In this, Mahabali was very different from his notorious ancestors. He belonged to a family that was capable of causing trouble only on a cosmic scale and twice before Vishnu had to incarnate as an avatar to stop his ancestors from overrunning the universe. He was the grandson of the great Devotee of Vishnu, Prahalada. To rescue Prahalada and the gods from his persecuting father, Hiranyakashipu, the Narasimha avatar came in to being. And Hiranakashipu’s brother was the even more terrible Hiranyaksha, who had to be taken out by the Varaha avatar. So all in all, Mahabali had a very respectable pedigree when it came to universe conquering. However he was different in that even the gods had to accept his overwhelming virtues.

Nevertheless, they complained to their nominal mother, Aditi, the wife of the great rishi Kashyapa. Aditi’s fervent pleas convinced Vishnu to do something and remedy this situation, especially as Mahabali was beginning to show signs of being corrupted by power. He agreed to be born to Aditi and Kashyapa as a dwarfish son, so as to disguise the potential threat he was. By now Mahabali was having delusions of grandeur and he also thought that he was greater than the creator. For he was holding a great festival-sacrifice, and he announced that he would satisfy the desires of all who turned up. Vishnu appeared as this extremely charming little Brahmin boy. His speech and intellect captivated the poor unsuspecting Daitya, who wished to reward the little man for his formidable display of learning. He rashly and proudly promised to grant any wish of the visitor.

By now his guru, the wily and suspicious Shukracharya, had worked out that this Brahmin was none other than Vishnu and he was here to play mischief with the glory of the Daityas. He urged Mahabali not to go on with this fatal generosity, as Vishnu was sure to ask for something that would destroy them. Mahabali however, would not budge from his pledged word. Such exemplary fidelity to truth was going to destroy his race, and his guru was angry that he was putting his personal reputation above his duty to his people. This refusal to listen to good advice is indicative in the Hindu Worldview of a wilful desire for self-destruction. In any case, the dwarf was only asking for as much land as could be covered by three paces of his feet. It was almost insulting that he was asking for so little when the riches of the great Mahabali were at his disposal. However the dwarf answered that he who could not be satisfied with three paces of land would never have satisfaction in anything, with no end to his desires. 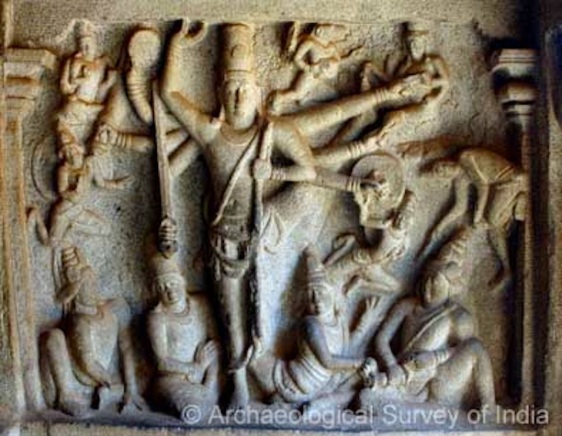 Mahabali promised him his three paces, whereupon the dwarf suddenly assumed a cosmic galaxy spanning size and covered the universe in two paces. The third pace was thus a debt upon Mahabali and he asked Vishnu to place it upon his head, as that is the most valuable possession he owned, Vishnu having already achieved dominion of all else. In some versions of the myth, Vishnu uses his three paces and covers the triple worlds. Mahabali is thus deposed from his position as ruler of the universe and Vishnu, like all good leaders of such revolutions, exiles the former ruler to the nether regions, called Patala. There is a sneaking sense of regret at such scurvy treatment towards a ruler who had done no wrong and kept his word to boot. Vishnu is supposed to have given him the eternal dominion of Patala as some sort of compensation for being cheated in such a fashion. 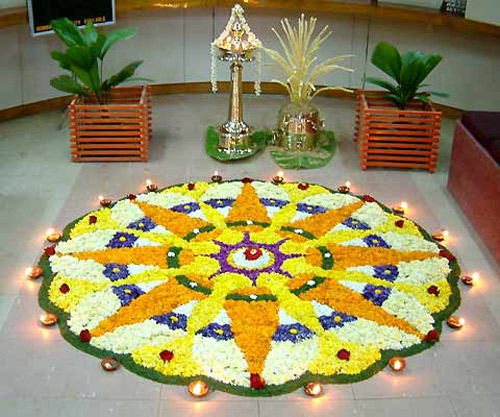 In fact Kerala’s Onam festival is based upon just this aspect of the myth. Once a year, Mahabali comes back to see how his former subjects are faring, and they put on a gorgeous spectacle to reassure him and not cause him any unhappiness that his people are suffering! In this rather naïve outlook is clearly represented the fact that public opinion felt Mahabali had been done a dirty trick. That however, is the nature of Vishnu who is the Trickster God of mythology par excellence. One very unusual version of the myth says that Vishnu felt remorse at this treatment of a pretty decent king and asked him to choose between a place in heaven and hell. The only catch was that his companions in heaven would be five fools, while in hell he could have five intelligent and wise sinners. Mahabali chooses the latter feeling that hell is the company of stupid people. Vishnu was enchanted by this perception and granted him the dominion of Patala. So strongly is the injustice done to Mahabali felt that it is also written that he will ascend to the position of the leader of the gods, Indra, in due course after the present incumbent’s term is over.

In this myth there is also a curious aspect of the Avatar cycle which is passed over, and that is the fact that some avatars are double avatars. The Vamana form is what the avatar is known as, but when he transcends it and grows, he becomes Trivikrama, the Triple Victor of the three worlds. In a sense therefore, it’s the most complete avatar, there is nothing greater than this. This is Vishnu’s greatest form, in no other avatar, not even as Krishna, did he ever manifest such glory. It also is an allegory on the latent potentiality in every living thing as well as a warning never to underestimate anything because of its appearance. The insignificant looking dwarf, a butt of ridicule and fun, turns out to be the World Overthrower. It Illustrates an old Sanskrit saying, Yatha Pinde, Tatha Brahmande. Which means, “As with a man, so with the Universe”. It is the same thing as the old mystical definition of man as a Microcosmos, which mirrors and is in essence the same as the external Macrocosmos. Or – As within, so with out; As above, so below and so on and so forth. We are all, in potential, the Universal Man. 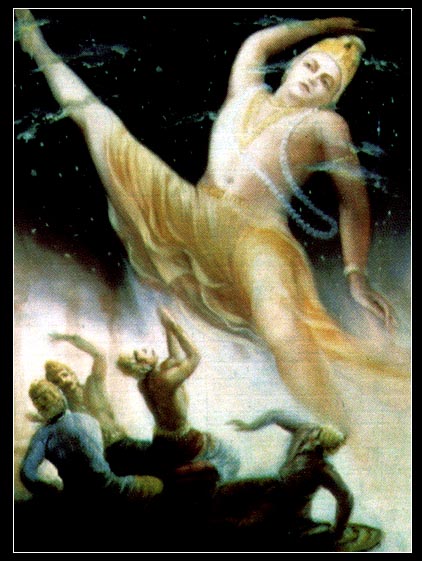 However, this lesson seems to be slightly more than the average mind could easily take within and the Trivikrama form has only been used to illustrate the walls of temples, almost never worshipped. A sympathy with such a transcendental form would have caused a social revolution, and it was quietly put aside in favor of the more manageable Rama and Krishna or the placid Sleeping Vishnu

Rohit Arya is an Author, Yogi and Polymath, being a writer, a corporate trainer, a mythologist and a vibrant speaker.  He has written the first book on Vaastu to be published in the West, {translated into five European languages} the first book on Tarot to be published in India, co-authored a book on fire sacrifice, and is the creator of The Sacred India Tarot {82 card deck and book}. He was the Editor of The Leadership Review, and on the advisory panel of Indiayogi.com, the first spiritual portal in the country. Currently he is the Director of Pro-Factor, a leadership and change facilitation corporate training outfit. He has been an arts critic and socio-cultural commentator for over two decades. Rohit is also a Lineage Master in the Eight Spiritual Breaths system of Yoga. He founded the Arya Yoga Sangha and leads multiple meditation circles each week. The videos of his talks on various subjects can be found here http://www.youtube.com/user/TheAryayogi