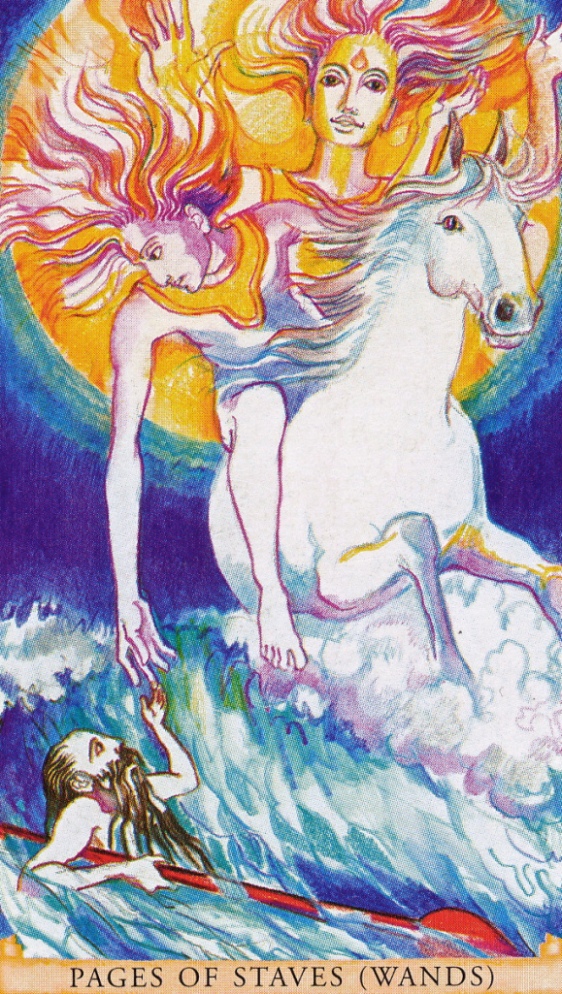 The Ashwinis seem to be the most energetically joyful of all the gods known to man. They hurtle through the cosmos in a dizzying effervescence of joy. They are the lords of speed, the swift rivers, the falcons of light, the riders of the fleet horse, agile and brilliant as Rig Veda says.  Speed is their keynote.  They bounce off the walls of heaven with a rush of energy, like young colts.  They are the most dazzlingly handsome personages in the universe, and they know it – ‘swift footed lords of bliss, much enjoying’. Later stories would elaborate on them as sensual gods. In some versions they marry jointly, Savitri the daughter of Surya the Sun God.  She was nominally supposed to marry Soma, lord of the moon and the sacred drink, but the Ashwins were much more handsome and cut a spectacular dash!  Other myths tell that they married the ten rays of the Sun, Surya’s daughters … But they had no time to lech like other gods.  Savitri was the only one who could keep up with their rapidity.

“The Ashwini twins are Vedic gods who were once held in high esteem but have been all but forgotten. They were however, the prototype for the notion of Kumara the eternal youth, which is how both Skanda and the Buddha would be represented in future sculpture. AS healers they were emerged into Dhanwantri later.

“It is known to a few, that the Awhwinis were the first physicians, doctors to humanity as well as the gods.  They were one of many Solar deities in the Vedas; many of their attributes were taken over by Vishnu when his cult by a process of osmosis, engulfed all the solar gods in his vast embrace

“The Ashwins were not effete dandies, careering across the cosmos in solar powered Ferraris.  They were that rarest of heroes, intellectuals who could act decisively and swiftly. They were described as ‘effectual in action, the powers of movement, fierce-moving in their paths:  they embodied the Samurai dictum – ‘to think and to act are one and the same‘.  They are the power of movement itself, so speedy and firm were they perceived to be. They used their great knowledge to help the gods – which was appreciated – and also to alleviate the sufferings of Humanity – which was not. Like Prometheus they had to face an angry Indra, leader of the gods, who punished them by depriving them of the right to drink the sacred Soma, which conferred strength and immortality on the gods. Soma was only too pleased; they had cost him a wife. However, the angry gods could not punish the Ashwins – they moved too fast to be caught, and they were no pushovers. Nobody knew the extent of their strength, nor wished to risk finding out.

“The Ashwins did not care too much about being excluded from the sacred drink.  They were caught up in their experiments and always on the move, as an active life principle. They made an iron leg for the warrior named Vispala who lost his in battle.  They were physicians and worked tirelessly at their craft.  The jealous humans said they had forfeited divine honours by associating too much with humans!  In later medieval times, the physician’s job was regarded as greatly polluting as it interfered with the evil Karma which produced the disease – a cruel doctrine. It is greatly to the Ashwins’ credit that they chose compassion over the approbation of their fellows, and continued to do what they had always done. They healed countless numbers of the lame, and restored sight to many who were blind – an apt action for the Lords of the Light.  The similarities with events in Palestine many thousands of years later are also obvious.  One of the Ashwins’ most coveted boons was to restore youth and vigour to the aged and decrepit. That might explain why they did not need the Soma like the other gods did.

“The Rishi Chyavana was old, feeble and ugly. Constant immersion in meditation had covered his body with vegetation until an anthill arose around him. The beautiful Sukanya thought his still visible eyes were glow-worms and poked them out with a stick, to capture them. Instantly the people of that region were cursed with terrible pain; the only way out of this was to marry her off to the sage she had wronged.  Sukanya accepted the grotesque situation as being fair – the blind sage needed someone to care for him. One day however, at the riverbank (a liminal, threshold site) Sukanya observed the Ashwinis frolicking in the water, and sighed for her lack of such joys.

“The Twins had a rare moment of lust, and propositioned her, confident in their youth and beauty. But she rebuked them severely and abashed them.  Yet they still had their hats in the ring, and offered to cure her husband of blindness and senility, and give him a handsome form like their own.  This was the catch: she must pick out her husband correctly from the identical trio, or agree to go with them.  Sukanya consulted her husband who decided to teach the presumptuous gods that he may be old and blind, but did not become a rishi for nothing.  When they emerged from the water in which the gods dipped the old man, she instantly recognised her husband through his instructions; the gods do not blink, sweat, cast shadows or leave footprints – and the human was easily found out.

“The Twins were sporting about it, and Chyavana, grateful for his rejuvenation, instructed them in an esoteric part of the Vedic sacrifice that even the gods had forgotten.  Armed with this new knowledge, the Ashwinis marched back into the divine company and traded off the right to drink Soma for this new rite in the fire sacrifice.  They came full circle – rejected for their love of humanity and restored by it too.

“Some have mistakenly translated their name to be Horsemen, from Ashwa the horse they ride. The horse as a symbol of prana indicates the Ashwinis’ perfect control over the breath, as well as their dazzling speed. The word Ashwini is derived from a root word which means ‘to fill everything’. One of the twins pervades the universe with Light, the other with Moisture – another indication that they were proto-Vishnu, ‘he that pervades’.

“In another story, they rescued a great sage from a flood that threatened to drown his learned life. The Ashwins sent him a log to clamber up onto and float around until realising who was responsible for this providential intervention.  Then they appeared before him, blessed him and instructed him in spiritual matters.

The Twins were heralds of the dawn, lords of the fleetingly transient state between night and dawn, again an attribute of their great speed. This places them firmly as liminal or threshold deities, guardians of sacred and rare times when higher levels of consciousness may be accessed.  This peculiar aspect of their potency is acknowledged in verses where the Ashwinis are addressed as the children of the sun, of the earth, of the waters, and even as sons of the submarine fire.  All are conjunctions, especially the horizon where one space interacts with another, forming a natural threshold, and are key areas for the Ashwini to act.  They are the great facilitators of transition, but only to the Light.  They simply do not have the time for anything else.

They give that impelling energy for the great work which, having for its nature and substance the light of the Truth, carries man beyond the darkness.

“The Ashwinis represent a glorious phase of Indian culture, and there are very few gods who are so reverberant with light. They are action incarnate, joyful graspers of life and laughter, quick to act and determined in their courses, intelligent and compassionate. The thrill they get out of being alive, is magnificent; it is a great pity that India has lost the ability to be in sympathy with such an exultant use of talent, ability and power. This is life lived to the fullest, to delight in action and glory in the mind … ‘Take joy in the Word, the holders in the intellect, by the luminously energetic thought’ …

“It was a sad time when India forsook the speedy gods of Light for more sedate worship.

“In the Vedic constellations, the Ashwins are in Aries, the sign of the New.

Sri Guru Rohit Arya is a Yogi , Author and Polymath, being a Spiritual Mentor, a writer, a corporate trainer, a mythologist and a vibrant speaker. He has written the first book on Vaastu to be published in the West, {translated into five European languages} the first book on Tarot to be published in India, co-authored a book on fire sacrifice, and is the creator of The Sacred India Tarot {82 card deck and book}. He was the Editor of The Leadership Review, and on the advisory panel of Indiayogi.com, the first spiritual portal in the country. Currently he is the Director of Pro-Factor, a leadership and change facilitation corporate training outfit. He has been an arts critic and socio-cultural commentator for over two decades. Rohit is also a Lineage Master in the Eight Spiritual Breaths system of Yoga. He founded the Arya Yoga Sangha in 2013 and leads multiple meditation circles each week.

The videos of his talks on various subjects can be found here http://www.youtube.com/user/TheAryayogi