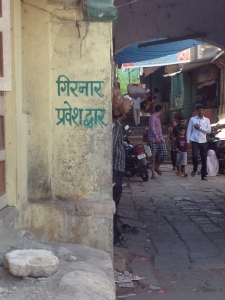 A daunting mountain of many peaks, infused with Fire Tattva, an ancient yogic mechanism to break karma and egoic self in 7550 steps of rock and agony, Girnar is Gujarat’s highest peak, over 3666 ft and a truly incredible spiritual experience. The climb begins from the small town of Junagadh, near Rajkot city in Saurashtra, and is surrounded by forest which includes lions.

This cave is the first real highlight on the climb and we are already past 1500 steps. Most people come to some sort of reckoning with themselves by this point and realize they cant make it to the end. The Yogi who lived here was supposed to be a king who renounced his throne and is currently in the Himalayas. He is also supposed to be close to 600 years old. What was once a great tapasya and meditation spot has been changed into a donation collecting temple as is the wont with India 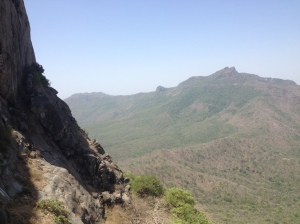 tt is astonishingly steep and difficult but in spite of that and the roasting heat of mid May, nobody fell or slipped or got heat exhaustion that I could see in all the people on the mount. Some sort of safety mechanism exists in the kshetram the energy field of the mountain. 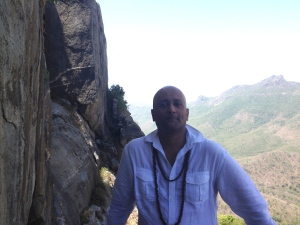 I was not tired nor did i feel the heat but the kshetram was unlike anything i have experienced. Not that it was rejecting or anything but there was a clear message – “This you will have to earn!” It is a strange place, occult, esoteric, secretive, with many presences who veil themselves from you as their path is different.

This is steepness, this is challenge and going down was perhaps worse than climbing. I think anybody who is over 65 kilos is going to find it difficult

One of the many Jain temples dotting the only plateau. This is in front of the main Nemainath temple, the Tirthankara who is suppsed to be Krishna;s cousin. The murti was incredibly powerful. The mountain radiates a tapasya vibe

There is nothing but the next step and how you are going to get over it. No problems, no worries, no dreams no desires nothing but this one awful reality of the present moment and the next step. Dhyana and dharana combined into one painful package of awareness. 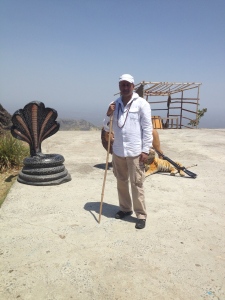 Some kitsch boundary guardians on the second plateau 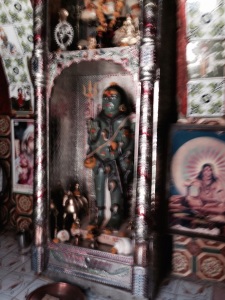 The Dattareya peak or the Gurusthan, A living embodiment of Agni, from the sacrum to the solar plexus the male upward pointing triangle of fire yantra was active, imitating the form of this final peak.

reduced to essence. when you climb back up to Gorakshanth peak you understand what Bhayankaram means

A few last glimpses before the long descent to reality

Rohit Arya is a Yogi , Author and Polymath, being a Spiritual Mentor, a writer, a corporate trainer, a mythologist and a vibrant speaker. He has written the first book on Vaastu to be published in the West, {translated into five European languages} the first book on Tarot to be published in India, co-authored a book on fire sacrifice, and is the creator of The Sacred India Tarot {82 card deck and book}. He was the Editor of The Leadership Review, and on the advisory panel of Indiayogi.com, the first spiritual portal in the country. He is the Director of Pro-Factor, a leadership and change facilitation corporate training outfit. He has been an arts critic and socio-cultural commentator for over two decades. Rohit is also a Lineage Master in the Eight Spiritual Breaths system of Yoga. He founded the Arya Yoga Sangha in 2013 and leads multiple meditation circles each week.

The videos of his talks on various subjects can be found here http://www.youtube.com/user/TheAryayogi

One thought on “Girnar mount and the sacred climb of fire”