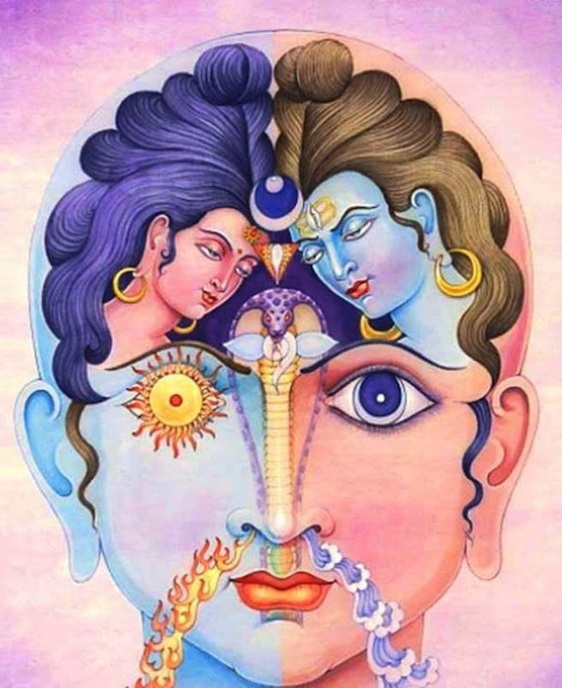 The two hemispheres of the brain are in Yogic terms, controlled by the energy constructs we call Shiva and Shakti. This image demonstrates in visual expression what had been hitherto part of the oral tradition. It is a stunning image, and replete with Kundalini yoga symbolism. Since it has come into the public domain I will explain some of this ancient vidya or process. Not all of it. Some rahasayas, spiritual secrets have to be discovered through Shrama – toil! Those are the rules so I make no apologies for reticence. What is safe to reveal I will.

In symbolic terms this image is a dense and rich harvest of yogic communication. I do not know the artist to give credit where it is due but I suspect it is Harish Johari. The style and depth of knowledge seems to favor that conclusion. In astrological terms, the Sun controls the right eye, the Moon the left. Shiva is the Sun who is Shiva, “Akshayam param shivam” which can be read in both ways simultaneously. The sun like Shiva is the guru, the source of life which is literally as well as metaphorically true. The Moon has famously been the lord of emotion and hence Devi controls it and the left eye. Shiva wears the moon on his head – Chandrashekara – to symbolize his complete integration of emotions as well as to stress that his responses come from awareness, not instinct. Devi’s head naturally pulses with the Sun. Her power of impulse and instinct is not unaware; it is suffused with the shakti of evolving consciousness, it flows from the Source.

The left nostril connects to the Ida nadi or lunar channel for the Kundalini Shakti to flow. It is cooling, calming, intuitive and creative, traditionally known as feminine. Hence it is depicted as cool waves or water, which is pretty accurate as a sensation of breathing in thru that nostril once you are deep into kundalini or pranayama.  The right nostril connects to the Pingala nadi or solar channel and is fiery, energetic action oriented and masculine. The breaths flow like fire, generating heat and energy for action. As is clear from the imagery and all the teaching of the tradition, neither aspect can subsist independently or without active support from the other vibration. They are not separate, they cannot be separated either. Life is troubled when such futile attempts are made to privilege one side or the other.

The erect serpent at the center of the brows is the fully active Ajneya chakra. It is also one of the points where the Ida and Pingala cross each other forming a grand marma or spiritual junction of power. It is the highest point at which you can keep the kundalini energy in waking consciousness and also carry out your work physically. It also confers a lot of power and occult ability as well as wisdom. If the Kundalini rises higher then you go into deeper Samadhi, At this juncture waking and physical action consciousness, including talking and writing, cannot be maintained together. The inverted triangle at the forehead is the spiritual Yoni, the Matrix of creation of generation, distinct from the lower yoni that is controlled by the svadhishtan chakra and is the Eros impulse. When your kundalini rises to this point you can send a surge of energy into the world and what you wish is manifested. It is a process requiring great responsibility and it is fortunate it is beyond most people! Even to keep the energy at ajenya is fearsomely difficult. Even higher than that the kundalini rises to experience the blue pearl, Sun and Moon conjunct, about which I will hold my peace. It is important  – that is all I will say.

Shiva is indeed the Purusha, Man Primal also known as aware consciousness while Devi is Prakriti, Woman as the Activating Force, the dynamic principle of the Universe, the unfolding action of life that takes place across the backdrop of Witness Consciousness that is Shiva. To be Integral which is the point of Yoga is to have both aspects function optimally, in harmony and as required rather than in simpleminded alternation or even lopsided dominance of any one side at a time. To live life privileging one side is to make an immense blunder.  The Ardhanarishwara, the Masculine- Feminine, Shiva and Shakti merged, united, Integral has always been the ultimate goal and aspiration of the Human Endeavor in the culture.

Rohit Arya is an Author, Yogi and Polymath, being a writer, a corporate trainer, a mythologist and a vibrant speaker.  He has written the first book on Vaastu to be published in the West, {translated into five European languages} the first book on Tarot to be published in India, co-authored a book on fire sacrifice, and is the creator of The Sacred India Tarot {82 card deck and book}. He was the Editor of The Leadership Review, and on the advisory panel of Indiayogi.com, the first spiritual portal in the country. Currently he is the Director of Pro-Factor, a leadership and change facilitation outfit. He has been an arts critic and socio-cultural commentator for over two decades. Rohit is also a Lineage Master in the Eight Spiritual Breaths system of Yoga. He leads the Ka Sangha meditation group, as well as The Integral Space meditation circle each week.

7 thoughts on “Shiva Shakti in the head”