VARUNA, the Vedic Lord of Justice  – Varuna is derived from var – to cover.  Varuna therefore is he who covers the Universe.  In so doing, he is upholding and preserving Ritha, cosmic law as well as cosmic inevitability, a concept both superior and anterior to Dharma.  We will try and send you one of the rare sculptures of Varuna.  He should be a blazing figure of light, erect and tall, with the vast expanse of the Universe behind him.  Since he is both a Sky God as well as Lord of the Waters, that aspect should be sought to be conveyed.  In his right hand should be the famous Varuna-Pasha, the noose of Varuna that drags the unrighteous to their doom.  It is actually a very difficult figure to draw, because there is no cultural context for Varuna any more.  However, that is to our advantage.  We can create, or recreate, something original.

The hymns in praise of Varuna are some of the most exalted known to man in any culture.  So it is a great surprise that Varuna-worship declined in the catastrophic manner that it finally did.  Most Hindus today know him as a minor godling with some power over the waters, not as the great arbiter of justice and order in the cosmos.

“Varuna is credited with finding the sun, hidden in the cosmic waters, and setting it in the sky.  He also parts the earth and sky, a creation myth most famous in Egypt, as the story of Geb and Nut.  (Ma’at, the Egyptian goddess of justice, stood for ‘the right order’.)  Varuna is praised as the King of Kings, the first Emperor concept in the mind of the Aryans, the one responsible for making it rain.  This aspect of kingship would become an inseparable part of Indian culture, the acid test for good rule was if the rains came in time and plentifully.  If they did not , then ergo, the King had failed to rule well.  Varuna is praised as the great Magician too, who strides through space and measures apart the earth with the sun, as with a measuring stick.  Which also tells something about the technological level of the society that worshipped him.

“The hymns rise to a pitch of exaltation when they contemplate the splendour of Varuna, for he is a god who never does a mean or dubious action, unlike Indra who was always in the grip of his Hero’s Destiny, and couldn’t care less how he attained it.  Varuna is ‘the victory in swift horses, milk in the dawn cows (essence of light/wisdom, the Sanskrit word gau meaning both cow and light), intelligence in the hearts of men, and fire in the waters.   He is the great Friend of man, as the word mitra means friend;  he severely punishes transgressions against friendship.  This is a unique note in Indian culture, obsessed as it is with family and deeply ambivalent about friends.  The loss of the Vedic weltenschauung reduced  the culture in many ways.

“… Varuna is described as being in the midst of the celestial waters as well as being a sky god, a juxtaposition possible only in one spot.  Varuna’s power over the water, as well as the geographical conjunction of ocean waters with the sky at the horizon, made sure that his watery aspect would remain, even when his people cast him down from the sky …  Varuna is rarely depicted in images or paintings, but when it is done he is always in the erect posture of perfection, the atibhanga posture, with a noose in his hand.   He rides a makara, a fabulous animal with the head and front legs of an antelope, and the body and tail of a fish.  Best of all he is supposed to live in a house with a thousand doors, as he is always accessible to man.  The Cosmic Friend still has a little place in the imagination of his people. 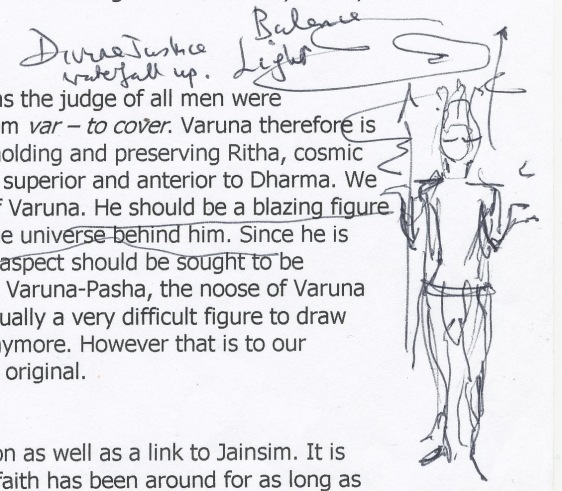 NB – Studying intensively at the time, the Builders of the Adytum Tarot deck, developed by Paul Foster Case.   The archetypes are translated through distinct cultural modes of the western and the eastern decks, while holding the common ground.   A very concentrated work, in tandem.   The process throws up its own meditations and ideas.   Varuna and the early version of the Hermit were painted almost at the same time..

“Began yesterday Indian Tarot Eight – or got launched.  Coming quite well.  The Eight, as in my old hermetic deck, refers to the Dharma – divine justice or Law of natural growth.  But in the BOTA Tarot, Eight is Strength and Eleven is Justice.  There are good reasons for both versions.  The number 8 has an infinite stability.  Now Eight in India Tarot is Varuna, the very ancient and decayed Vedic god of the waters and of air.  He puts the sun in the sky, parts earth and heaven, stands where and as the rain falls, and he is a being of Light and of the Four Worlds.  He discriminates levels of operation.  He is very Hermetic.  Suggest bands of cosmos behind him, a little like in some representations of Jacobs Ladder, and the rainy sky about his knees, his feet planted in wet grass with crocuses.   Not an Indian flower, but could have been in those days.  Whenever I think of Dharma, I think of crocuses, their spears and roots.  Well, they have bulbs, not roots.  They blossom and live off storage.  Varuna is a fountain divinity, and I think my “cushion shot” may have succeeded in manifesting a certain inner-plane Egyptian’s features (which I’ve been searching) – a contact.   (Cushion shot is a term used in billiards.   You strike a ball at a tangent, to bounce off the edge – the cushion – and strike another.   And so with spiritual practices!)

The Hermit following, is to be some intensely meditating divinity, but the happy idea this morning came – wondering about his lamp – to have him in the heart of a very dark earthy cave – just a darkness, even an en sof night around him:   (en sof means without end) only a small area of stone immediately in front of him will be illumined – specially after typing into Self Enquiry last night, eleven pages of Abhishiktananda’s Secret of Arunachala in its caves.   It’s strange to appreciate so deeply the mystic tradition there, and be so much at odds with its modern generation …

“I think now that Varuna should have around him an impression of the tall Belgian beech boles – the wood and he a shaft of Light.   Oh dear.  Which is it to be – horizontal bands of Jacobs Ladder, vertical harp-strings of trees, or both?   It is the Cross of Gold, of Light.   An inner painter is asked to portray these things.   The other night I was in fear, because so unawake and sterile for vision.   I can’t draw.   This happens often.  I think it will never come again.  Then it does – it was only the tiredness:  accept.   It is a comfort to write, for my inner guide surfaces and suggests things to me, and clarifies my weary eyes again.

“Speaking of which – I forgot to write this down the other day – when I’m out and about, there comes with attention, an impression that I walk in my own heart.  The street and all the world is (Douglas Harding) without a head.  My feet – the pavement – the tissue of my centre space, I am being painted. A sense of gravity wakes in my feet, and hurrying is replaced by flow.   Now what occurred to me the other day, was Kabbalistic.  I was scurrying blindly up West End Lane thinking about something, and suddenly I thought:  those POOR COMPANIONS OF THE LIGHT, what a terribly boring time they have, trying to see the physical world through our senses and lenses, and having to inhabit these murky TV-snowscreen cocoons as if inside a worm.   If I were a Companion I would want to see EVERYTHING.   So I opened my eyes and looked and listened.  I saw for instance how traffic and cars are simply a view of the demonic will in the psyche, macadamized.  I see peoples’ strangely vulnerable protective metal screens – brittle metal, not real metal. To the medieval Raven Knight within:  What is your name?

“Yesterday I brought Varuna to the verge of completion, and to my astonishment, drew most of the Hermit as well.  Having been struggling and suffering, I am at the moment drawing as guided – a great relief.  It’s awful when you can’t see, and have to approximate through hours of elimination, and lovely when you can see, and the hand flows along the lines.    I think That Page (for my tutor’s inner-plane Master) is coming into relief, though I haven’t finished drawing what is on it.  My hand is being held again.   Oh, poor child.

“… Incidentally, while working on the Hermit yesterday, I noticed for the first time that the lion had V’s face. V has an angry lion look in his old age.   Might Leo be his ascendant?   The likeness has faded now, with developing the creature.   But I am slipping into new waters, and he who ‘served me well’ is maybe under the bridge.”

“Dear Gautam and Rohit – Varuna and the Hermit are virtually ready.  I shall try with Mr E to send them to you tomorrow evening, our time …    Trouble scanning Varuna and then a domestic emergency, so had to rush home.  I shall try a colour Xerox of Varuna tomorrow and snailmail it to you if rescan not successful.  The yellows of his robe and figure were not coming through …   … 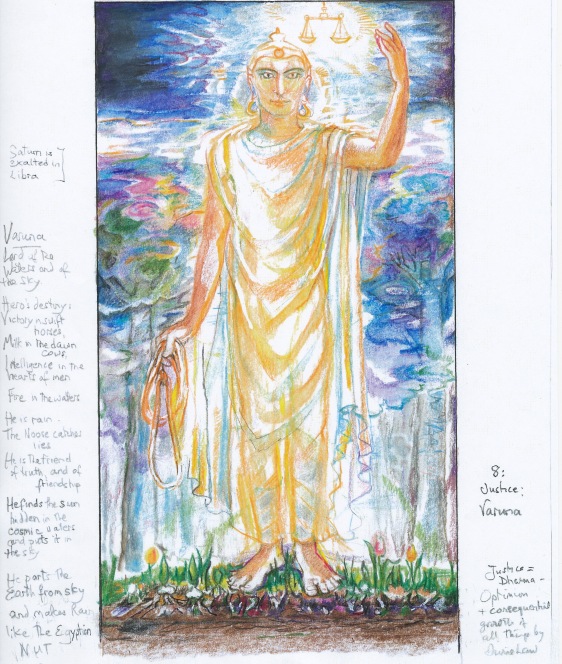 “Dear G and R, I trust you have received cards 8 and 9.  8 is larger than the original, and 9 is smaller.  Mr E has a new computer and printer – we enhanced these on the new monitor, and they came out well in every detail, but slightly darker – probably don’t need enhancing at all.   Last time I tried to send you Varuna, it came out very faint.  Anyway, you must try to imagine the yellows as being brighter – in Varuna the folds of his garment are of a light fiery gold like sunshine, and in the Hermit (early version) the green around his figure is in the original rather luminous, with a warm lemony-gold light through it, almost sparkling.

Please give me some ideas yow you see th Wheel of Fortune – just to get me started.  Have recovered from some flu-y days.  Warm greetings to you both, J.

“Hi Jane, we received Hermit, but not Varuna.  Rohit has been traveling to 4 cities across India to promote the Money Tarot book.  We tied up with India’s leading chain of bookstores, wherein Rohit gives a free reading to those who buy the book.  I am still looking to focus on Tarot publishers in the west, especially USA, to sell the rights to his book.  Inner Traditions said they will seriously review it and revert to us.  I did send the book to M, but he was not interested, and I feel we need to focus on Tarot publishers.  Do let me know if you have any suggestions.  Rohit returns tomorrow, and we will revert in a couple of days on hermit.  Meanwhile, will send you further stuff on Wheel of Fortune.  Warm regards to Alan and yourself, Gautam.”

Rohit Arya is an Author, Yogi and Polymath. He has written the first book on Vaastu to be published in the West, {translated into five languages} the first book on tarot to be published in India, co-authored a book on fire sacrifice, and is the creator of The Sacred India Tarot {82 card deck and book}. He has also written A Gathering of Gods. He is  a corporate trainer, a mythologist and vibrant speaker as well as an arts critic and cultural commentator. Rohit is also a Lineage Master in the Eight Spiritual Breaths system of Yoga