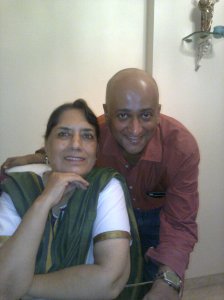 “How do we recognize an authentic teacher?”
Well, if they are in a well-known parampara that is some sort of credibility right there. Paramparas have rules as to who gets to be a Lineage Master, though these rules can be altered over time. A real Master has a master who is unambiguously acknowledged. A real Master remains in unified consciousness, and you can see that in their Integral Presence. {I am sorry I cannot make this any easier!} A real Master tends to have the slightly alarming quality of causing Jagaran or ‘activation’ in people who come to them or interact with them. In my case I could not care less about actually practising Yoga and meditation, though I had immense knowledge about it as I am, for my past karmas, a Polymath. While editing and commenting upon Santosh Sachdeva’s ‘Kundalini Trilogy’ of books I got activated by the incredible visuals they contained. My knowledge saved me there as I knew that these peculiar occurrences meant the Kundalini was off like a rocket and I was in jagaran, not off my rocker. I promptly announced her as my guru – to her great personal reluctance I might add, I am her first disciple, and perhaps her first miracle- for I was not a very pleasant person, nicknamed the ‘Smiling Cobra’. Further comment is superfluous.
Over the years I have seen those books of hers, which are unprecedented in the 5000 years of yoga by the way, activate many people. Many others come, seeing in her illustrations an accurate simulacrum of their internal energy shifts, rather than, as their families tend to assert, final proof they have gone batty. A real Master has knowledge of these states, they know the ground thoroughly and prove it by their daily responses. And finally a Real Master can guide others to the goal, the experience of unified consciousness. It is said that it is not the numbers of disciples that a guru attracts that is the point but how many of them become enlightened. This point is sometimes forgotten today where spiritual success is measured, in popular perspective, in large institutions and huge numbers of disciples. Ramakrishna Paramahamsa was unknown all his life but he had nearly 50 enlightened disciples, which is why Aurobindo said the earth cannot bear such a descent of holiness like Ramakrishna for another 500 years.
I got the Lineage transmission this year 2011 on Maha Shivratri in unusual circumstances. So I am a Parampara Nath, a Lineage Master, but it merely means my obligation to the parampara is now much greater, “More is expected”. It is not an achievement as much as a perpetual responsibility; it is superb elation however.
“How long does a Parmapara last?”
When the only surviving lineage Master dies, without having been able to transmit the parampara to even one disciple, the lineage comes to a halt. What normally happens is that the parampara then ‘awakens’ spontaneously in some other worthy spiritual seeker and the system continues, even if under another name, and even if the new Master has no clue why his life and sadhana has taken on this strange aspect! This process is supposed to be facilitated by Shiva or any of the great Masters who have transcended the body. The best known recent example is the spirit of Swami Vivekananda teaching Aurobindo for a fortnight in some aspects of yoga. Sri Aurobindo had come to a stage where he needed further input, but the living masters could not reach him as he had been jailed by the British! When you reach a certain level of intensity however, the Universe is obligated to answer you and expedite your sadhana, so Vivekananda had to step in.
Very often the Masters are aware of lurking dangers where a parampara is concerned and they take steps to protect it. My own lineage, that of the Eight Spiritual Breaths, was saved from catastrophe twice. Once it was rescued from Nalanda University, and taken to Tibet, before the Islamic invasions from the 12th century ravaged the centres of Buddhist learning in India. In the 1930s the Masters were aware that trouble was brewing from China in the future and the lineage was transmitted to a most unlikely source, an Englishman called John Dingle, who wandered all over China, nearly died of disease, but learned this system under incredible circumstances in Tibet, and then took it safely to California! Had he not done so, this little effusion from me would never have taken place! For my lineage is a unique tangle. We do not know the name of the Tibetan founder in modern times, referring to him as Nameless Guru. {I know from my meditation he was a reincarnation of Miyamoto Musashi, Ken-sai, the sword saint, Book of Five Rings…right}. John Dingle taught this system to Guru Jyotirmayananda, a Tamilian, who taught it to Justice Dudhat, a Maharashtrian, who transmitted it to Santosh Sachdeva, a Punjabi lady who finally taught a Keralite, Yours Truly!
“Gahano karmana gati!”
Rohit Arya is an Author, Yogi and Polymath. He has written the first book on Vaastu to be published in the West, {translated into five languages} the first book on tarot to be published in India, co-authored a book on fire sacrifice, and is the creator of The Sacred India Tarot {82 card deck and book} to be published in the last quarter of 2011. He has also written A Gathering of Gods due at the same time. He is the Editor of The Leadership Review, a corporate trainer, as well as an arts critic and cultural commentator. Rohit is also a Lineage Master in the Eight Spiritual Breaths system of Yoga.

One thought on “Rohit Arya explains Parampara or Spriritual Lineage”